Sam’s Transport are Suppliers of AdBlue based in Rugby, in the West Midlands. Our Ad blue prices are incredibly competitive; why not call us for a quote? Call: 01788 571102 or contact us in your preferred way and request a call

The actual price of UK AdBlue varies according to quantities delivered, but as a guide, it is roughly half the gross price of diesel per litre at the UK’s pump. It reduces diesel fuel use of SCR vehicles by up to 5%. Which can more than compensate for the cost of AdBlue. Meaning you get a lower running cost for your SCR vehicles than for your non SCR vehicles.

You’ll get the best price when you buy it from Sam’s Transport – but we would say that! If you’re wondering what it costs or what sort of price should you be paying – tell us what quantity you need and we’ll give you a quote! Call 01788 571102 and get a quote today.

Need help working out the quantity you need to buy?

Just let us know… We will be happy to provide some guidance. We can help you to work out which pack size is most suitable to your operation.

We supply Adblue in the the following package sizes: 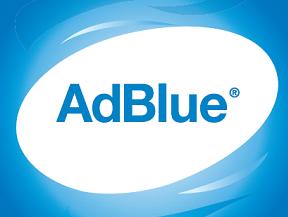 It’s a colourless liquid which is made up of 67.5% de mineralised water and 32.5% Urea – if you’re really technical; it means it acts as a reduction agent that reacts with, and neutralises, nitrogen oxides (NOx) in the SCR process.

Urea is an organic compound of carbon, nitrogen, oxygen-rich fertiliser, which the worlds farmers use to help improve their crops.

Why do your vehicles need Adblue?
Well, it’s about protecting the environment.

Whilst emissions for diesel engines have been steadily reducing since that date, the next, more stringent stage of the regulations has required the inclusion of altogether new technology.

The response from the industry was to introduce 2 new innovations:

Adblue – is it a diesel additive?

No. AdBlue is a completely separate system. It actually does not come into contact with with diesel at all. 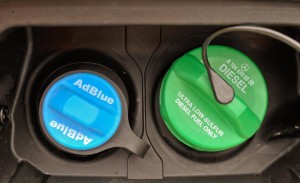 What about storage? How does AdBlue get stored? Is there a separate tank?

Yes. There’s a separate tank on the vehicle chassis; it can be found by looking for the blue filler cap: shown in the image to the right.

How do you fill up the tank?

It’s easy. It’s done using a straight forward nozzle. However, the really good thing about Adblue, is that you hardly ever have to fill it up, because the vehicles you use it in will use so little of it.

There have been lots of misplaced concerns about AdBlue, but it’s not hazardous. You don’t have to wear protective clothing when filling up, and if you spill any, you can simply wash it away with some water. Note: with small spillages, you might see a little white crystallisation form – they are non-corrosive and can just be wiped away.

It doesn’t freeze – well, not technically true; it begins to freeze at -100C. It becomes totally frozen at -200C. You’ll freeze a lot sooner that this though, so you wont have to worry too much about that.

What sort of quantity will a Euro 4 truck use?

A small tank give a very long range. The actual amount wil be based on the type of work you have the vehicles doing. Those vehicles that are working harder are naturally going to use more. Based on the ‘assumptions shown in the table, an average 7.5 ton vehicle which covers about 500 miles in a week, will end up consumining around 4 litres. (Cost circa £1.60)

If you decide to take another example, a three axle tractor at around 44 tonnes working for over 2,000 miles per week will end up using around 45 litres – which would cost around £18.

Fun Fact: A typical 18 tonner running from Land’s End to John O’Groats will use just 8.6 litres of AdBlue at a total cost of £3.35!

What happens if you run out of AdBlue? Are you breaking the Law?

Yes, in the same way that you would be breaking the law if you did not replace your windscreen fluid.

However, it is not true (just another pointless rumour) that if you run out of AdBlue, your truck will break down of the engine will shut down. This is NOT true. 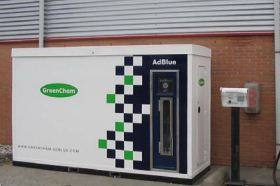 Those vehicles which are registered from the 1st October 2007 are bound by legislation which will force the engines to restrict to 60% of it’s peak level if it detects excess NOx for any reason (such as; the vehicle is running out of AdBlue, or there is a valve failure on an EGR engine).

This will only happen after the drivers info system has alerted the driver and the vehicle has come to a standstill. For clarity; at 60% of peak level – most vehicles will still reach it’s regulated speed limits – just with less acceleration.

Can anything impact on the UK AdBlue price?
Yes. Because it’s a high quality urea, which makes urea its main raw material. Urea is made by using large amounts of energy, mainly natural gas. The levels of oil and natural gas, as well as ammonia prices have a direct impact on urea prices. When raw material costs increase this has an impact on the AdBlue UK market.